While riding the tram over the last weeks, I found myself observing what people read and decided to start a compilation of the different genres and authors found in the public transport. This is the fourth four-book instalment: 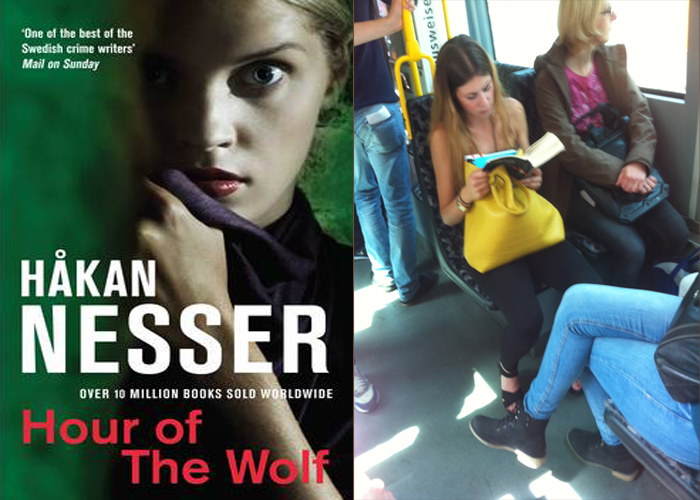 Hour of the Wolf by Häkan Nesser

In the dead of night, in the pouring rain, a drunk driver smashes his car into a young man. He abandons the body at the side of the road, but the incident will set in motion a chain of events which will change his life forever. Soon Chief Inspector Van Veeteren, now retired from the Maardam police force, will face his greatest trial yet as someone close to him is, inexplicably, murdered.

Håkan Nesser is a Swedish author and teacher who has written a number of successful novels, mostly crime fiction. He has won Best Swedish Crime Novel Award three times, and his novel Hour of the wolf won the Glass Key award in 2000. His books have been translated from Swedish into numerous languages. A recurring main character is called Van Veeteren, a detective in the early novels and later the owner of an antique books shop. These books play out in a fictitious city called Maardam,  said to be located in northern Europe in a country which is never named but resembles Sweden, the Netherlands, Poland and Germany. The names however are mostly Dutch.

Judas Unchained is the sequel of Pandora’s Star in which after hundreds of years secretly manipulating the human race, the Starflyer alien has succeeded in engineering a war which should result in the destruction of the Intersolar Commonwealth. Now, thanks to Chief Investigator Paula Myo, the Commonwealth’s political elite finally acknowledges the Starflyer’s existence, and puts together an unlikely partnership to track down this enigmatic and terrifying alien Commonwealth. Judas Unchained largely improves on the first book (although since there are fewer unknowns in the plot it lacks the thrill of discovery Pandora’s Star sometimes had) and is another fine piece of Science Fiction that makes a good ending to the two book series.

Peter F. Hamilton (born 2 March 1960) is a British author. He is best known for writing space opera. As of the publication of his tenth novel in 2004, his works had sold over two million copies worldwide.

Free from lies by Alice Miller

Reading this book is a therapeutic encounter with one’s own life’s story. Dr. Alice Miller, author of such world-renowned books as the Drama of the Gifted Child and The Truth Will Set You Free, has devoted her life to empowering people who have severe symptoms from denying that they suffered physical and emotional abuse as children. Here, in Free from Lies, she tackles uncharted territory as she shows how former victims can finally heal the scars of their youth by finding the true history of their childhood instead of denying it.

Alice Miller was a Swiss psychologist of Polish-Jewesh origin, who is noted for her books on parental child abuse, translated into several languages. Her book The Drama of the Gifted Child caused a sensation and became an international bestseller with the English publication in 1981.Her views on the consequences of child abuse became highly influential.In her books she departed from psychoanalysis charging it with being similar to the poisonous pedagogies. 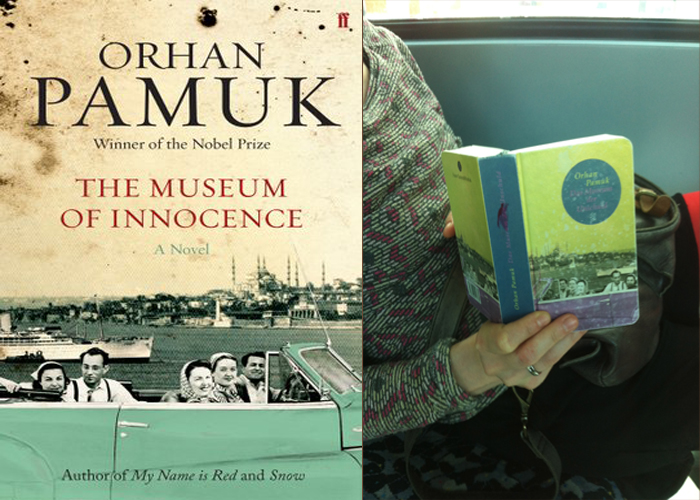 The Museum of innocence by Orhan Pamuk

The Museum of Innocence is a novel by Orhan Pamuk, Nobel-laureate Turkish novelist published on August 29, 2008. The book is an account of love between a wealthy businessman Kemal and a poorer distant relation with Füsun during the period 1975 to 1984 in Istanbul. Kemal’s engagement to a pretty girl Sibel is in two months time when he meets shop girl Füsun while buying a handbag for his fiancee. What follows in next month and a half is an intense and secretive physical and emotional relation between them.

Orhan Pamuk is a Turkish novelist, screenwriter, academic and recipient of the 2006 Nobel Prize in Literature. One of Turkey’s most prominent novelists,his work has sold over eleven million books in sixty languages,making him the country’s best-selling writer. Born in Istanbu,l Pamuk is Robert Yik-Fong Tam Professor in the Humanities at Columbia University, where he teaches comparative literature and writing.His novels include The White Castle, The black book, The New life, My name is Red and Snow.