While riding the tram over the last weeks, I found myself observing what people read and decided to start a compilation of the different genres and authors found in the public transport. This is the first 5-book instalment: 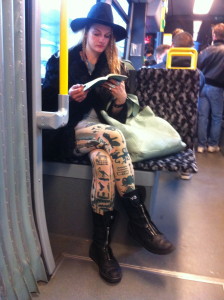 Septuagenarian Stew is a combination of poetry and stories written by Charles Bukowski that delve into the lives of different people on the backstreets of Los Angeles. He writes of the housewife, the bum, the gambler and the celebrity to evoke a portrait of Los Angeles.

Henry Charles Bukowski (born Heinrich Karl Bukowski; August 16, 1920 – March 9, 1994) was a German-born American poet, novelist and short story writer. His writing was influenced by the social, cultural, and economic ambience of his home city of Los Angeles. His work addresses the ordinary lives of poor Americans, the act of writing, alcohol, relationships with women, and the drudgery of work. Bukowski wrote thousands of poems, hundreds of short stories and six novels, eventually publishing over sixty books. 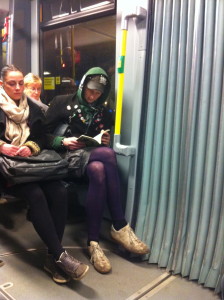 Werner is a fictional character, appearing in a number of German comic books and animated films. He was created by Brösel (Rötger Feldmann). Werner is the most successful German comic character of all time with over 10 million books sold and over 13 million film admissions.

The character of Werner is based on Brösel’s and his brother Andi’s experiences. Werner’s life is that of an unemployed biker that consists of souping up his motorcycle and consuming large amounts of beer (known as Bölkstoff in the comics). Both regularly gets him in trouble with the police and the German vehicle safety agency TÜV, who due to their expressed incompetency and imbecility are usually ignored and duped by Werner. 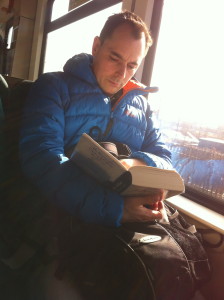 Every Man Dies Alone or Alone in Berlin (Jeder stirbt für sich allein) is a 1947 novel by German author Hans Fallada. It is based on the true story of a working class husband and wife who, acting alone, became part of the German resistance. They were eventually discovered, denounced, arrested, tried and executed. Fallada’s book was one of the first anti-Nazi novels to be published by a German after World War II.

Three months after its 2009 English release it became a “surprise bestseller” in both the US and UK. It was listed on the official UK Top 50 for all UK publishers, a rare occurrence for such an old book. Hans Fallada’s 80-year-old son, Ulrich Ditzen, a retired lawyer, told The Observer newspaper he was overwhelmed by the latest sales, “It’s a phenomenon.” Primo Levi said it is “the greatest book ever written about German resistance to the Nazis.” 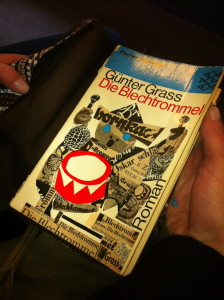 The Tin drum by Günther Grass

The Tin Drum (Die Blechtrommel) is a 1959 novel by Günther Grass. It is the first book of Grass’s Danziger Trilogie. It was adapted into a 1979 film, which won both the Palme D’or in the same year, and the Academy Award for Best Foreign Language Film the following year.

The Tin Drum uses savage comedy and a stiff dose of magical realism to capture not only the madness of war, but also the black cancer at the heart of humanity that allows such degradations to occur. Initial reaction to The Tin Drum was mixed. It was called blasphemous and pornographic by some, and legal action was taken against it and Grass. However, by 1965 sentiment had cemented into public acceptance, and it soon became recognized as a classic of post-World War II literature, both in Germany and around the world. 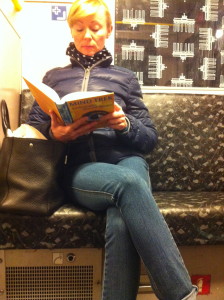 Remote Viewing (RV) is the ability to perceive and describe detailed information about a remote place, person, or thing–regardless of the normal boundaries of time and space. For over 25 years it has represented the cutting edge of research into the powers of the mind.

Mind Trek provides us with insight into new perceptions and realities and gives us an understanding of how to deal with the doubts and fears of the RV learning process. By showing the effects research has had on the author as a subject, it points to consciousness as the ultimate time-machine and the mind as the gateway to human creativity. It also establishes our own clear responsibility for the design of our future. This book also provides excellent guidelines for how to begin your own journey toward perfecting the art of Remote Viewing.